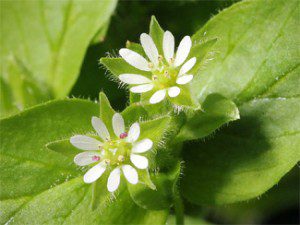 Chickweed is reported to curb the appetite and aid in weight loss. As a diuretic its medicinal properties aide the assimilation of other herbs and help them process and dissolve of fat. My personal experience is that Chickweed is a better appetite suppressant than the over the counter products on the shelf today.

Some say that Chickweed is purely an ‘old wives’ tale’ remedy for obesity. But in fact, there’s supporting scientific evidence that Chickweed may indeed be beneficial to weight loss, when included in a healthy lifestyle included proper diet and exercise. Basically, as a mild diuretic containing saponins, Chickweed emulsifies the fat cells and assists them out of the system. In Healing Wise by Susun Weed, it says that Chickweed is an excellent metabolic balancer with a potentially regulating effect on the thyroid.

Dandelion root is an excellent diuretic as well as a good source of vitamin C and potassium.

Senna, Cascara Sagrada, psyllium husks and flax seed are helpful purgative herbs to cleanse the colon, but should not be used for more than 2 weeks.

There’s also hoodia, of course. It took the South African national laboratory 30 years to isolate and identify the specific appetite-suppressing ingredient in hoodia. When they found it, they applied for a patent and licensed it to Phytopharm.

Phytopharm had spent more than $20 million on research by late 2004, including clinical trials with obese volunteers that have yielded promising results. These volunteers ended up eating about 1,000 calories a day less than those in the control group. Consider that the average American man consumes about 2,600 calories a day and woman about 1,900. “If you take this compound every day, your wish to eat goes down. And we’ve seen that very, very dramatically,” says Dixey. But be careful… no one has demonstrated that the resulting product is safe. And many products claiming to contain hoodia only have minute amounts of the active ingredient.

And last but not least, Stevia. Cutting out sugar will definitely aid in weight loss efforts. Stevia contains various glycosides, particularly stevoside, give stevia its sweetness. Stevoside is somewhere between 100 and 200 times sweeter than sugar. Early reports suggested that stevia might reduce blood sugar (and therefore potentially help with diabetes), although not all reports have confirmed this. Even if stevia did not have direct antidiabetic effects, its use as a sweetener could reduce intake of sugars in such patients.