Stevia – The Weight Loss Aid that is the sweetest of sweets…

Safe for diabetics as it does not raise blood sugar! 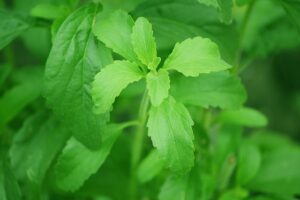 Originally found growing wild in the highlands of Paraguay, the Stevia herb is the sweetest substance on earth. Known to the natives as Khaa Jee but more commonly referred to as stevia (stevia rebaudiana).

This is a wonderful dietary supplement used for over 1500 years as a sweetener and for medicinal purposes.  Since the 1970’s, it has been used in Japan as the main alternative to sugar, used instead of the banned aspartame  in diet soda, gum and other food and beverages.  It is also being used as a sweetener in other countries after extensive studies proved it’s safety. It has been used with success to treat many ailments including diabetes, high blood pressure, gingivitis, digestion ailments, addictions,  topically for acne and other skin ailments and also as a wonderful weight loss aid.

DIABETES: Known for its nourishing properties for the pancreas, stevia has been used by diabetics for centuries as a sweetener and also as a method of controlling blood sugar levels.

TEETH AND GUMS: Due to high beneficial mineral content and anti-bacterial properties, it is a wonderful additive to toothpaste or diluted as a mouthwash.

TOPICAL APPLICATION: Applied to the skin, it treats acne and other skin ailments.  It also protects against premature aging.