Cascara Sagrada: (Rhamnus purshiana) Spanish for “sacred bark,” comes from the American buckthorn tree native to the western coast of North America, from California to British Columbia, and as far inland as Montana.

Cascara sagrada is one of the few herbs approved as an over-the-counter drug by the U.S. Food and Drug Administration. 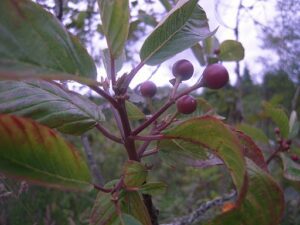 Cascara sagrada is used as a laxative. The anthraquinones stimulate the bowel, leading to evacuation after approximately six to ten hours.

This herb also provokes secretion of fluid and minerals into the large intestine and inhibits their re-absorption. It is suggested for situations in which a soft, easily passed stool is desirable, such as hemorrhoids or following rectal surgery.

Extracts of R. purshiana can inactivate herpes simplex virus, but this property has not been utilized medically.

The portion of the plant used is the bark. The main ingredients are anthraquinones. Emodin and aloe-emodin have also been identified, along with a number of nonlaxative ingredients.

It is not appropriate for regular use and can cause problems such as dependence if it is used too often.

Abdominal cramps or diarrhea have been reported. Chronic use of laxatives may lead to excessive loss of potassium or other electrolytes, which may be dangerous. In addition, anthraquinones can cause pigmentation of the large bowel. A serious problem associated with chronic use, however, is that a person may become dependent on such a stimulant laxative and become unable to evacuate without it. This leads to problems that resemble ulcerative colitis. Possible Interactions: If use results in excessive potassium loss, heart rhythm irregularities may occur. This problem could be especially severe for people taking the heart drug Lanoxin. It would be unwise to use this herb together with other herbal medicines that can cause potassium loss, such as aloe or licorice.

Medications such as hydrochlorothiazide, Lasix, Hygroton, Lozol, Bumex, and other potassium-wasting diuretics are probably incompatible with the herb, at least if it were used more than very occasionally. Like other strong laxatives, may reduce the absorption of other medicines taken orally.