Psyllium is a bulk laxative. 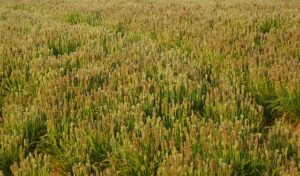 The powdered seeds of psyllium   Click to listen highlighted text! psyllium are taken with ample water, and once in the intestine they swell. This “bulk” encourages defecation, and the mucilage tends to soften the stool and make it easier to pass. Psyllium preparations can reduce pain and bleeding from hemorrhoids (see also Witch Hazel).

Seeds (also known as blond psyllium. isabgol, or ispaghula) are derived from a species of plantain that is native to India and Iran. The seeds are small and reddish-brown, with no distinctive aroma and almost no flavor. They absorb water and become surrounded with mucilage that has excellent emulsifying power and is prized as a laxative.

The main constituent of the seed is dietary fiber. Although the majority of it is insoluble, there is also a fair bit of soluble fiber in the mucilage. This is mostly polysaccharides. The seeds also contain proteins, other carbohydrates, oil, sterol, and some flavonoids, but the soluble fiber is primarily responsible for its therapeutic action.

This herb is frequently recommended for the treatment of constipation and is even approved as an over-the-counter drug in the United States under brand names such as Fiberall, Konsyl, Metamucil, Modane Bulk, or Serutan.

In addition to its value for treating chronic constipation, it can be useful in treating diarrhea. In one study, symptoms of irritable bowel syndrome improved with psyllium administration. Diarrhea following gallbladder surgery has also been successfully treated with psyllium seed.

Psyllium seed has also been used to reduce high levels of cholesterol and triglycerides. In an eight-week trial, total cholesterol decreased by 14 percent and undesirable LDL cholesterol by 20 percent. In studies lasting more than two months, triglycerides came down to just over half the baseline levels. The seed is also reported to slow the absorption of dietary sugar. This may be beneficial in diabetes, although it is a subtle effect.

The usual adult dose is 7 g of psyllium seed preparation up to three times a day to a maximum of 30 g per day. It must be taken with at least 8 ounces of water each dose. Paradoxically, the dose for diarrhea can range even higher to a maximum of 40 g daily. Children from six to twelve years old are treated with half the adult dose. It may take two or three days for it to produce the desired effects. Unlike other laxatives, this seed may be used as long as needed without fear of dependence.

Children under six years old should take psyllium seed or psyllium preparations only under medical supervision. Psyllium seed is not appropriate for anyone with intestinal blockage. People allergic to psyllium must avoid it. Constipation or diarrhea that persists for several days deserves medical attention.