The herb was used by the Kashaya Pomo in Northern California for diabetes and eye disorders. Mentioned in many older texts in Buryatia, Europe, China as an herb valuable for it’s powerful ability to correct many diseases of the digestive system, circulatory system and eyes.

The English use it to make a delicious “spring” or “diet” drink for purifying the blood. 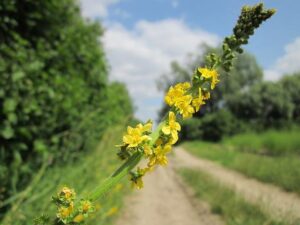 It is considered an especially useful tonic for aiding recovery from winter colds and fevers. Agrimony is also said to aid in liver, kidney, and stomach problems.

As agrimony also offers an astringent action, frequently used as an herbal mouthwash and gargle ingredient, and externally in the form of a lotion to minor sores and ulcers. It has also been recommended, as a strong decoction, to cure sores, blemishes, and pimples.

Agrimony can be used in various ways, but its use as a tea may be the most common and is said to be a gentle blood purifier.

Agrimony is a rose-family herb that grows among hedges and fences all over England. The herb has a unique, pleasant aroma that is similar to that of apricots but is not as sweet.

Agrimony contains tanin and a volatile, essential oil. Its many helpful plant components that help the body eliminate waste. Tannins, flavan-3-ols, flavonols, flavones, and phenolic acids are examples of antioxidants that have a therapeutic impact. These chemicals have also been shown to have anti-inflammatory and analgesic properties.

Infuse 1 teaspoon dried agrimony root, leaves, or flowers in cup of boiling water for 15 minutes. Strain and flavor with honey and a little licorice root if desired. Take up to 1 cup per day.

Not recommended for use in pregnancy or breast feeding. No other precautions have been reported. Always seek the advice of a qualified medical professional.