Echinacea – The preventative herb that boosts your immune system.

Echinacea products are currently one of the best-selling herbal preparations in the United States. 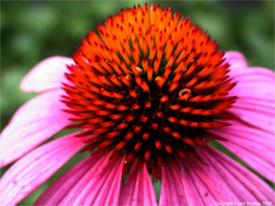 Echinacea   Click to listen highlighted text! Echinacea containing herbal preparations have become increasingly popular over the past two to three decades as being capable of modifying or regulating one or more immune functions.

The results of many clinical trials strongly suggest that echinacea-containing products improve symptoms and shorten the duration of colds and upper respiratory infections, though not all trials have turned out positive for some types of products. However, reports have been made that suggest that some studies use too low of a dosage for effectiveness.

Not used in any modern commercial drugs today, but Echinacea is heralded by many herbalists as one of the very best blood purifiers and an effective antibiotic. Its contains a natural antibiotic that makes it an effective, broad-based infection fighter. It is considered an immune system stimulant which increases production of infection fighting T cells. It is believed to strengthen the body’s tissues and protect from attacks of invasive germs.

My experience with echinacea: I always have this in my herbs and natural remedies cabinet. However, I only take it for the first month at the change of seasons to build my immunity, particularly to colds and flu in the fall and winter. Tried and true for two decades! While some say taking it long term could weaken your own natural defenses, I have not seen that happen at all, probably because I take it seasonally only. I’m a big believer!

In the occasion that I do have signs of a cold, or the flu, I turn to Elderberry immediately. It has a nearly immediate effect on either stopping it in its tracks, or greatly reducing the length of time I have to endure the symptoms.

You may also be interested in the Health Benefits of Fruit, after all, elderberry is fruit!

“If you’re not interested in healing yourself with its roots, you can simply enjoy the beauty of echinaceas in your yard or garden. They have a very slight fragrance and propagate into beautiful, meadowlike beds if you let them. …”
Rodale’s Illustrated Encyclopedia of Herbs

There are nine species, but only three of them (E. angustifolia, E. pallida, E. purpurea) are used as botanical medicines. Gardeners may recognize echinacea as the purple coneflower. The three species are not interchangeable, although they may sometimes be confused with one another. Each may have a different balance of active compounds. Of course, the roots also differ from the aboveground parts of the plant, though both are utilized medicinally. The chemistry of echinacea is complex, and no single ingredient has been identified as primarily responsible for the therapeutic activity.

One thing to remember is echinacea should be taken on an as-needed basis or at the change of a season. Not continually. Echinacea boosts the immune system but continual use may actually lessen the effectiveness of your own immune system.

Maximum time to take the herb has been suggested at six to eight weeks.

Echinacea is generally a very safe herb with side effects being very rare even when taken in large doses.

One of the problems with this herb is that the different species may be confused by people gathering the herb from the wild.