Angelica for digestive and bronchial problems

What are the benefits of Angelica?

The magical qualities from old or not, many properties and uses for Angelica are real.

The medicinal use os Angelica today centers on the treatment of digestive and bronchial problems.

A decoction of the root can treat indigestion, gastritis, inflammation of the intestines and flatulence. The stem can be steamed and eaten like asparagus, the leaves brewed into a fine tea that aids digestion, and the oil of the root can be added to a bath for relaxation.

It is used for loss of appetite, to promote circulation and to warm the body (particularly for those who often have chilly hands and feet). Applied externally, it can ease rheuatic pains, stomach cramps and muscle spasms.

Many tales surround this herb. Tales of its angelic nature and its pagan associations, of its healing powers and its wonderful taste, and of its potential hazards. This herb is said to bloom every year on May 8th, the feast day of St Michael the Archangel. Thus, its reputation as an angelic plant with the magical powers of healing and protection. It was thought to ward off evil spirits and witches. Its juices were drunk to ward off spells and poisons.

Angelica is a plant, not a tree, that can grow as high as eight feet. European angelica is a biennial or perennial herb native to northern and eastern Europe and parts of Asia. Angelica has been used for centuries in European medicine as an expectorant for bronchial illnesses, colds and coughs, and also as a digestive aid for stomach disorders. By the fifteenth century it was in popular use. In the English herbal entitled Paradisus Terrestris, published in 1629 C.E. by John Parkinson, angelica was reported to be one of the most important medicinal herbs of that time. 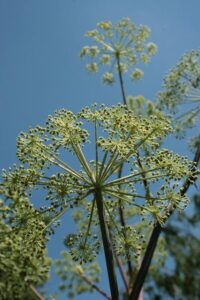 Some of its early uses are at least partially supported by in vitro studies of angelica’s active coumarin and furanocoumarin constituents. One of these, angelicin, relaxes smooth muscles in vitro, including those in the gastrointestinal and respiratory tracts.

There hasn’t been a standard dosage established, and it’s unclear what a safe dose would be to avoid issues and adverse effects.

Side Effects: The furanocoumarins present in angelica root sensitize the skin to light. Subsequent exposure to UV radiation can lead to inflammation of the skin. During treatment with the drug or its preparations, prolonged sun-bathing and exposure to intense UV radiation should be avoided.

Use During Pregnancy and Lactation is not recommended.

May increase blood pressure and interact with blood thinners.

May also negatively interact with medications that have warnings about grapefruit consumption.