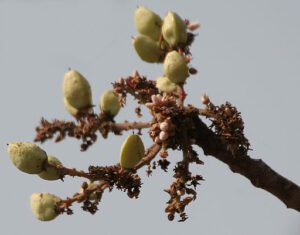 Boswellia has been used in connection with asthma, rheumatoid arthritis, ulcerative colitis, bursitis, and osteoarthritis.

As opposed to NSAIDs, long-term use of boswellia does not appear to cause irritation or ulceration of the stomach. One small, controlled, double-blind trial has shown that boswellia extract may be helpful for ulcerative colitis.

The standardized extract of the gum oleoresin of boswellia is recommended by many doctors.

In the ancient Ayurvedic medical texts of India, the gummy exudate from boswellia is grouped with other gum resins and referred to collectively as guggals. Historically, the guggals were recommended by Ayurvedic physicians for a variety of conditions, including osteoarthritis, rheumatoid arthritis, diarrhea, dysentery, pulmonary disease, and ringworm.

It is a moderate to large branching tree found in the dry hilly areas of India. When the tree trunk is tapped, a gummy oleoresin is exuded. A purified extract of this resin is used in modern herbal preparations.

The gum oleoresin consists of essential oils, gum, and terpenoids. The terpenoid portion contains the boswellic acids that have been shown to be the active constituents. Today, extracts are typically standardized to contain 37.5–65% boswellic acids.

The herb is generally safe when used as directed. Rare side effects can include diarrhea, skin rash, and nausea. Any inflammatory joint condition should be closely monitored by a physician. At the time of writing, there were no well-known drug interactions.