Chamomile – good for almost anything that ails you

Chamomile has small, white daisylike flowers with a yellow center. The flower is the part of the herb that is used. 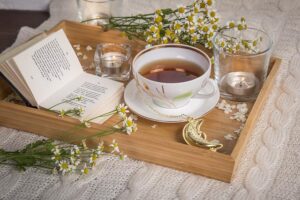 Chamomile   Click to listen highlighted text! Chamomile has a long-standing reputation as being good for almost anything that might ail a body.

Two different plants carry the common name. One of them, M. chamomilla, is sometimes referred to as Hungarian, German, or genuine chamomile to distinguish it from C. nobile, Roman or English chamomile. These very popular herbs are used almost interchangeably. However, they do differ.

Both types of chamomile have traditionally been used in tea to treat digestive distress including stomachache, cramps, colitis, and flatulence.

Chamomile preparations are also used topically for red, inflamed skin (such as Rosacea) and as a mouthwash or gargle. Components of chamomile have antibacterial and antifungal activity.

For the treatment of skin conditions such as Rosacea, steep a cup of strong tea (3 bags or equivalent loose tea) for 10 minutes and use as a cold compress on the affected areas.

People with colds sometimes breathe in the vapors from a steaming cup of the tea. This pleasantly aromatic steam is believed to help relieve congestion of the nose and lungs.

Millions of children have learned about one of its most widespread uses, treating indigestion due to dietary indiscretion, from Beatrix Potter’s The Tale of Peter Rabbit. Another traditional use has been to relieve menstrual cramps. Infusions are also used to stimulate the appetite and to aid digestion. Chamomile tea is considered a mild sleep aid.  It is also used as a gentle treatment for fevers.

The essential oils are not very soluble in water; as a result, the dose of active ingredients delivered in the usual cup of chamomile tea is low. However, regular use of chamomile tea over an extended period is believed to have cumulative benefits.

M. chamomilla: German chamomile flowers contain about 0.5 percent of a volatile oil that is light blue. The most important constituents of the oil are bisabolol and related compounds and matricin. Bisabolol has significant antispasmodic and anti-inflammatory activity.  Up to half of the oil is chamazulene, formed from matricin during heating.  Flavonoids in the flowers, apigenin and luteolin, are also active. In addition, the coumarins herniarin and umbelliferone may also quell inflammation and quiet smooth muscle spasms.  No single ingredient has been identified as responsible for the benefits of chamomile.  C. nobile: Roman chamomile flowers contain from 0.5 to 2.5 percent essential oil, which does not contain bisabolol.  The flavonoid ingredients are similar, though not identical, to those of M. chamomilla.

To make the tea, pour approximately 2/3 cup boiling water over 1 or 2 teaspoons dried flowers and steep at least five minutes.  For digestive problems, drink tea three to four times a day, between meals.

There are no limitations on duration of use.