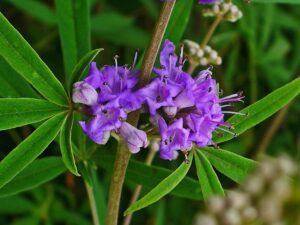 Chaste tree is a large shrub.  It can grow up to about 22 feet tall and is native to the Mediterranean and southern Europe. It flourishes on moist riverbanks but is easily grown as an ornamental plant in gardens.  It  blooms with pretty blue-violet flowers in midsummer.

The Greeks and Romans used this plant to encourage chastity and thought of it as capable of warding off evil.  Medieval monks were said to use the dried berries in their food to reduce sexual desire. As a result, it was also referred to as “monks’ pepper.”   Although Hypocrites used chaste tree for injuries and inflammation, several centuries later Dioscorides recommended it specifically for inflammation of the womb and also used it to encourage milk flow shortly after birth.  Current use of chasteberry is almost exclusively for disorders of the female reproductive system.  Oddly, the conditions for which it is most commonly recommended, premenstrual syndrome (PMS) and peri- or postmenopausal symptoms such as hot flashes, are associated with completely different hormone imbalances.

Studies have suggested that chaste tree can be used to treat conditions associated with excess prolactin. In a clinical trial of chasteberry for menstrual cycle abnormalities attributed to too much prolactin, the herb normalized both the cycle and the levels of prolactin and progesterone hormones.  It is also believed helpful for premenstrual breast tenderness, a condition linked to excess prolactin. Several uncontrolled studies in Germany have shown that chaste tree extracts can reduce symptoms associated with PMS.  It may be helpful for perimenopausal women with unusually short cycles or heavy bleeding.

Taking chaste berry shortly before bedtime may increase early morning melatonin secretion and improve sleep.  Chaste tree berry is slow acting. Two or three menstrual cycles, or a similar amount of time, may be needed to evaluate the effects. A standardized product from Germany is available in the United States under the brand name Femaprin.