Elderberry flower tea is used to “break” a fever by bringing on sweating. 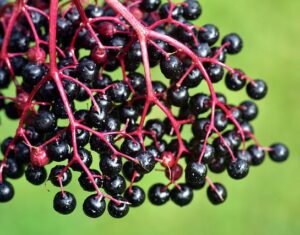 It is used especially for situations in which the feverish person feels chilled, and the tea is drunk as hot as possible.

A cooled infusion has traditionally been used as a gargle for sore throat.

Elder flowers are believed to have mild diuretic action.

Elderberry juice (made by cooking and pressing the berries) is reported to have laxative as well as diuretic properties.

Sciatica and neuralgia are among the traditional European uses of elderberry juice. Some multi-ingredient herbal preparations for rheumatic pain in the United Kingdom or in Europe include elder flowers or berry extract. It is also a component in multi-ingredient concoctions marketed for respiratory complaints.

Probably the most common use of elderberry is to treat colds. (See also Colds & Flu)

The taste & my experience:

In a word? Delicious! If you’ve tasted elderberries, you’ll be familiar with their delightful and healthful flavor because they have a sweet but acidic (tart-ish) flavor. I absolutely LOVE it. The berries also have a considerably sweeter, more savory, and succulent elderberry flavor when prepared for flavoring meals and beverages.

I prepare a decoction, which is like a very strong tea, and I store it in the refrigerator.  I make a quart, and take one tablespoon every day (which is difficult to do because it is so delicious) whenever I feel the teensyest under the weather or I feel like I need the extra support. Works like magic! Definitely recommend. (In case you’re interested, here’s where I buy the mix:  Elderberry Everything  (not an affiliate link) The mix is made with elderberry (primary), loose leaf black tea, ceylon cinnamon sticks, clove and ginger. So yummy!

I will also turn to the lozenges, when I’m already sick, which is a blend with zinc… I don’t have a recommendation because some of them taste terrible and I can’t remember the ones that taste good. I will update this post when I do find the right ones again. However, the combination lozenges are also miraculous, regardless of taste!

The American elder, is a large shrub native to North America. It bears white flowers early in the summer and dark, almost black, berries in the late summer. Both the flowers and the berries have been used as food and for making wine. According to James Duke, “Elder Blow [flower] wine is something special, delicious, with a beautiful pale yellow color.” Presumably American settlers knew the European elder, a plant believed to have magical healing powers, and used the American native in similar ways. The flowers were formerly prized for use in salves and ointments, and the juice of the berries was valued as a tonic.

Both flowers and berries are used and, in Europe, are considered different herbal medicines.

S. nigra is found throughout Europe and is still used as a botanical medicine. European elder flowers contain 0.03 to 0.3 percent of an essential oil that contains free fatty acids (particularly palmitic acid) and a large number of compounds called alkanes. They also contain at least 0.8 percent flavonoids. Caffeic acid and derivatives, including chlorogenic acid and p-coumaric acid, have been identified. Traces of a cyanogenic glucoside, sambunigrin, and the triterpenes alpha- and beta-amyrin are also constituents. American elder flowers may contain similar ingredients, but the essential oil is reportedly richer in linoleic and linolenic acids and lower in palmitic acid. European elderberries have up to 3 percent tannins. They too contain flavonoids, particularly rutin, isoquercitrin, and hyperoside, and several anthocyanins. Approximately 0.01 percent of the berries is essential oil, and the seeds contain a number of cyanogenic glucosides, including sambunigrin. Leaves and stems contain more sambunigrin.

A tea is made by pouring 2/3 cup boiling water over 2 teaspoons (3 g) of dried flowers and steeping for about five minutes before straining. As many as five cups a day might be consumed, particularly in the afternoon and evening. The tea is administered until recovery.

Careless handling of elderberry can result in poisoning. Children using peashooters made from the stems of the shrub have suffered, as did a number of people drinking elderberry juice at a picnic in the early 1980s. The cyanogenic compounds are especially concentrated in the leaves, and Tommie Bass reports using a solution made from elderberry leaves as an effective topical insecticide. Use of stems and leaves should be avoided.

Prudence suggests that pregnant women and nursing mothers should not use elderberry.