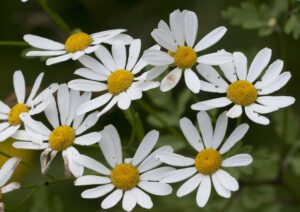 Feverfew has been studied and found effective for the prevention of migraine headaches, reducing the number of headaches suffered by as much as 70 percent, or reducing the pain and controlling the nausea commonly experienced with such headaches. Once a migraine headache begins, however, feverfew does not appear to relieve the pain.

Feverfew has anti-inflamatory properties and can also be used for treating skin conditions such as Rosacea.

Feverfew has been linked to several measurable changes in physiology. Extracts of the aboveground parts of the plant can reduce the body’s manufacture of prostaglandin, a chemical important in inflammation, by up to 88 percent. This and other anti-inflammatory activity might explain why the herb has been used to treat psoriasis.

In the test tube, feverfew extracts can keep blood platelets from sticking together and forming clots, so the herb may be useful as a mild anticoagulant. It achieves this through a different chemical pathway than aspirin or other salicylates. Feverfew also blocks platelets from releasing serotonin, which may help to explain how it works to prevent migraines. Feverfew extracts also prevent the release of histamine from mast cells, so the plant may be useful in the treatment of allergies. Presumably, it is also expected to lower fever, although there don’t appear to be modern clinical studies substantiating this traditional use.

Used by Greek physicians to treat “melancholy,” which may have included headaches as well as depression. The English used it into the seventeeth century for symptoms that might translate today into vertigo, depression, and headache, as well as for lowering fever. It faded from popularity after that, and during the eighteenth and nineteenth centuries was hardly used by herbalists. It was, however, planted in gardens, perhaps for the small daisy-like flowers or because it had a reputation for repelling insects. If that didn’t work, it was sometimes used as a balm to ease the itching of insect bites.

In many places it escaped from the garden and now grows as a wildflower in much of the northeastern United States. Only in recent decades has it come back into regular use, primarily to prevent migraine headaches. Dried leaves and stems, picked while the plant is flowering (July through October), are the parts used.

The principal measured component of feverfew is parthenolide, one of several sesquiterpene lactones. Canadian regulations call for a minimum of 0.2 percent parthenolide in feverfew products, while the French pharmacopoeia specifies a minimum of 0.1 percent. Parthenolide levels vary greatly, but most leaves from feverfew grown in North America contain less than 0.1 percent. In addition, feverfew contains flavonoid glycosides, particularly apigenin and luteolin. Melatonin has also been reported as a component of feverfew leaves. How much of the activity of feverfew is due to parthenolide (which is also found in a number of other plants) and how much should be attributed to other compounds has not been determined.

For the prevention of migraines: chew two to three fresh leaves daily; or take 125 mg of dried herb with 0.2 percent parthenolide. Treatment for at least two months is recommended. Doses from 50 to 200 mg of dried herb have been used for other indications but recommendations vary widely.