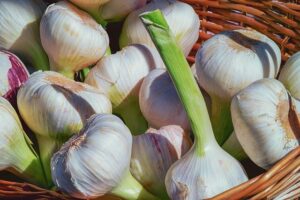 Throughout history garlic has been considered a powerful herb to fight inflammation, stop infections, kill parasites and restore vitality. The role of garlic as an antiviral and antibacterial is unsurpassed from ancient days to modern times.

It can help heal injuries like bites, cuts and burns, while quite possibly sooth headaches, lower the risk of heart disease, cancer, acne, boils, arthritis, candida, respiratory ailments, the common cold and earaches.

It can protect the digestive tract by inhibiting dysentery-causing amoebas and other infections. Studies have shown that garlic may reduce the risk of coronary artery disease, help to lower total and LDL cholesterol and triglycerides, inhibit platelet aggregation and reduce blood pressure.

When chewed or crushed a powerful antibiotic chemical is released. It may not act as powerfully or quickly as antibiotics but neither does it produce the side effects that antibiotics do.

While it can be as effective in fighting serious infections, its main use is in fighting ailments that are not acute or immediately life threatening. Small discomforts may signal an ideal time to load up on fresh or supplemental garlic.

Studies have shown that eating less than an ounce a week can help lower your risk of certain types of cancer and a clove per day can lower your cholesterol in as little as four weeks. (Energy Times, March 2000)

The wonder bulb is actually an onion with a compound bulb made up of four to 15 cloves. From ancient Pharaohs to modern pharmacists, it is considered one of the most important herbs for feeding and healing the human body.

“Once thought to possess magical powers against evil, garlic was widely used in charms and spells… Many of the legends surrounding garlic have to do with strength, speed and endurance. Egyptian slaves ate garlic as they built the pyramids. The Israelites nibbled it before their escape from Egypt… the Romans took it to strengthen them in battle since it was the herb of Mars, the Roman god of war… Medicinally, garlic has been prescribed since prebiblical times…” Rodale’s Illustrated Encyclopedia of Herbs 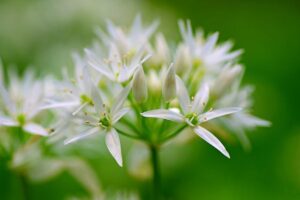 When in bloom, the dense clumps of wild garlic frequently cover the ground in woodlands. It is preferable to harvest the glossy green leaves when they are still young. They are long, pointed, and have a smooth edge. The exquisite white clusters of flowers usually begin to blossom in the middle of April. The flowers may give a lovely touch to salads and other foods and are delicious as well.

Here is a terrific reference about finding and cooking wild garlic.