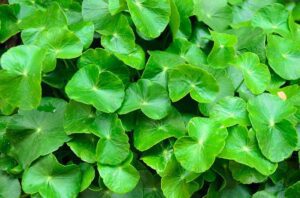 Gotu kola is traditionally used for high blood pressure and to treat nervous disorders. Chinese research suggests that it slows heart rate as well as lowers blood pressure. It also has some antibacterial activity. Gotu kola extract (as titrated extract of C. asiatica, or TECA) has been studied for its effect on varicose veins as well as on poor venous circulation in the legs. The results suggest that the extract can stimulate the synthesis of collagen in the walls of the veins and help them hold their tone and function better.

Other traditional uses of C. asiatica include skin problems, rheumatism, jaundice, and fever. Tests of TECA in animals showed that topical application helped experimental wounds heal faster. Asiaticoside may be responsible. TECA has also been observed in clinical settings, where it appears to speed healing of surgical incisions and skin ulcers. In one trial it was administered to patients with parasitic infections that damage the bladder. Three-fourths of these patients recovered well, with little or no bladder scarring.

Gotu Kola, is a creeping, evergreen perennial herb with kidney-shaped leaves and indentation margins that forms roots at its nodes. In the summer, Gotu Kola bears clusters of tiny pink flowers hidden beneath its leaves in groups of three.

Marsh pennies and Indian pennywort are other names for gotu kola. It is known as ji xue sao in traditional Chinese medicine and brahmi in Ayurvedic medicine.

This Asian species is reputed to bring long life to the user. According to the Sinhalese proverb: “Two leaves a day will keep old age away.” As the story goes, people in Sri Lanka noticed that elephants, animals known for their longevity, included Centella leaves in their diet. Extrapolation suggested that this creeping herb of Southeast Asian swamps might be good for almost anything that could ail a human, as well.

In Sri Lanka it is eaten as a salad, and in Vietnam it is considered an edible weed. It has been part of Ayurvedic medicine for a long time. C. asiatica also grows in Madagascar, parts of southern Africa, and some parts of China. In Chinese medicine, it is known as luo de da or ji xue cao and is used to lower fever, promote urination, and “detoxify” the body.

The Gotu Kola leaves and other above ground parts of the plant are used. C. asiatica contains several saponins, including brahmoside and brahminoside, and a number of alkaloids. Madecassoside and asiaticoside appear to contribute to the plant’s medicinal activity. It also contains flavonols, amino acids, fatty acids, sterols, saccharides, and some mineral salts.

Gotu Kola, aka Centella,  is a parsley family member with no particular taste or scent. While the plant produces a little oval fruit and pink blossoms, the stem and leaves are where the herb’s medicinal virtues are found.

Beyond the proverbial two fresh leaves a day, dosage information is limited. The usual dose is 0.5 to 1 g three times a day. The tea is made by pouring 1 cup of boiling water over teaspoon of dried leaves and steeping for ten minutes. Standardized extract: 60 to 120 mg per day. Fluid extract (1:1): 2 to 4 ml daily. C. asiatica should not be used for more than six weeks consecutively.

Pregnant women should avoid using this plant. This herb is not appropriate for people with epilepsy. Because of the possibility of photosensitivity, fair-skinned people and those who have reacted badly to sunlight while taking other medications should avoid sunshine, tanning lamps, and other sources of ultraviolet light while taking gotu kola.