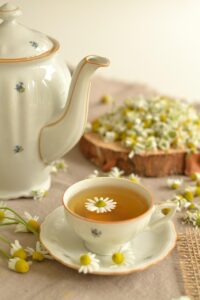 Here are 14  recipes of Herbal Tea…

to tempt your taste buds and make you feel better at the same time! What are you waiting for? Let’s put on the tea kettle and relax with a lovely cup of herbal tea right now!

Dandelion Tea:
Add 4–10 grams of dried leaves to a 250 ml (1 cup) of boiling water. Steep for 3-5 minutes. Acts as a mild diuretic or appetite stimulant,

Persimmon Tea:
The leaves when dried and crushed make a fine strong herbal tea. Can be used all year round. Rich in vitamin C. Used as a healthful tonic.

Sassafras Tea:
Boil fresh roots after washing, until water turns reddish brown. Can be sliced and dried for later use. Claimed by some to be a blood thinner, a blood purifier, to help bronchitis, a stimulating spring tonic. Mostly it is used for pure enjoyment.

Birch Tea (Wintergreen):
Black, yellow and white birch. Dried leaves can be used year round. A large handful of fresh leaves steeped in hot water was drunk 1 to 2 cups a day for rheumatism and headaches. Said to reduce pain of passing kidney stones, and a fever reducer. Cold it was used as a mouthwash.

Blackberry / Raspberry Tea:
The dried mature leaves of these brambles make a really good herbal tea. Used to help control diarrhea, as a blood purifier and tonic. Use all year round.

Blueberry Tea:
The dried mature leaves are steeped until cool and drunk 1 to 2 cups per day as a blood purifier and tonic. Also used to help inflamed kidneys and increase the flow of urine. Somewhat bitter. Use all year round.

Alfalfa Tea:
The dried and powdered leaves and flower heads make a very nutritious herbal tea, but it is somewhat bland. We suggest mixing them with normal teas to stretch them and add nutrition. Its vitamin content was the reason it was used. Used all year round. (See all the benefits of Alfalfa.)

Wild Strawberry Tea:
Use dried leaves normally. Pour several cups boiling water over a handful of fresh leaves in the evening. Cover and let steep overnight. Strain water and reheat in the morning. Believed to help with a multitude of things, from stomach troubles, eczema, diarrhea, etc. According to experts, it is much more healthful than purchased coffee or teas. Use all year round.

Wild Rose-Hip Tea:
A handful of these steeped for 10 minutes, then strained, make a healthful tea. Can be used dried or fresh in season. Instead of boiling, place a handful in cool water overnight, then stain and reheat in the morning. Use all year round. Strong Vitamin C content. Helps with Colds and the flu. Also for sore throat.

Sweet Goldenrod Tea (Anise):
Can use dried or fresh leaves or flowers. Makes a very flavorful tea. Pure enjoyment only!! Used all year round.

Soldier’s Herb Tea:
This common yard weed with green leaves and two seedie spikes was used by the colonials and Indians alike. One teaspoon of seeds per cup of boiling water steeped for 1/2 hour was used for dropsy and jaundice. A tea from fresh leaves (chopped fine), one heaping teaspoon per cup of boiling water steeped for 1/2 hour. For dried powdered leaves, use one level teaspoon and reduce time to 15 minutes. Drunk 4 to 5 times a day until relief was obtained. Used for gout, to help clean out nasal passages and to slow menstruation. Also used to expel worms. A tea cooled made from rainwater was used as an eyewash.

Ginger Tea:
Good for nausea and motion sickness. Make a tea using ginger, or add some ginger to a cup of weak black tea.

Rosemary Tea:
A handful of rosemary steeped for 10 minutes – this tea is good for headaches.

Looking for ready-to-brew herbal tea blends? May I suggest…

Disclosure: This is an affiliate product. Meaning, at zero cost to you, Herbsandnat would earn a commission if you click through and buy it. Your support is appreciated!