The traditional use of juniper berry is as a diuretic and to treat conditions of the bladder or kidneys. 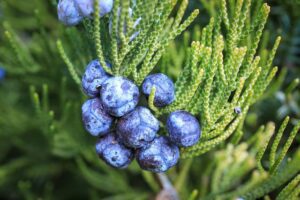 Diuretic action of juniper berry essential oil is well established and attributed to terpinene-4-ol, which has strong antibacterial activity, and increases the filtration rate of the kidney. Another traditional use of juniper berries or their extract is to pique the appetite or to aid digestion.

Water-based extracts such as tea may not increase urination, although such an extract did lower blood pressure 27 percent in an experiment in rats. At high doses, however, juniper berries or their extract can be very irritating to the kidney.

The aromatic “berries” (actually cones of this evergreen) have also been used in herbal medicine for at least three hundred years and perhaps longer.

Other Benefits or Juniper Berry

Juniper tar has been used occasionally in combination with other plant tars to treat psoriasis of the scalp.

Test tube studies show that juniper berries can inhibit prostaglandin synthesis, which suggests that the traditional use for easing arthritis pain may have some scientific basis.

In addition, they apparently inhibit platelet-activating factor (PAF), which would discourage blood clots. This is not a traditional use for juniper berries in herbal medicine.

This herb is from the small evergreen tree, and is one of several juniper species native to the northern hemisphere. It has the distinction, however, of being the principal flavoring for a commonly used alcoholic beverage, gin.

Juniper berries contain up to 2 percent volatile oil and 10 percent resin. The oil contains more than one hundred compounds including monoterpenes such as alpha- and beta-pinene, myrcene, limonene, sabinene, and an alcohol, terpinene-4-ol, which appears to be responsible for the diuretic properties attributed to juniper berries. The berries also contain as much as 30 percent invert sugar and small amounts of catechins, flavonoids, and leucoanthocyanidins.

Extracts apparently increase peristalsis and intestinal tone. Juniper berries were traditionally classified as “carminative,” meaning they can relieve flatulence. This use has not been carefully studied.

The tea is made by pouring 2/3 cup boiling water over 2/3 teaspoon (2 g) of dried berries, steeping for ten minutes, and straining. This dose is repeated three or four times per day. The best tea is made from berries rubbed through a sieve not more than one day prior to brewing. For the tincture (1:5 in ethanol): 1 to 2 ml three times a day. Juniper berries should be used for a maximum of four weeks except under medical supervision.

Juniper berries can be irritating to the kidneys. People with kidney problems should avoid them.

Pregnant women should not use this herb.

Juniper berries might cause uterine contractions; they prevent implantation in female animals.

Diabetics who choose to try this herb should ask their doctor, exercise caution and monitor blood sugar carefully.