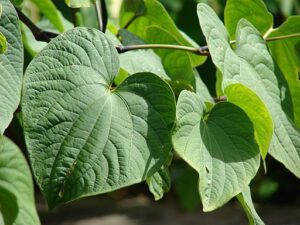 A lush, leafy green plant, it grows densely and is harvested when it is approximately six to eight feet in height. Kava is planted in a manner similar to that of sugarcane. Sections of its stalks are laid in trenches of mud, where they sprout. The stalk sections are then planted in shallow trenches, where they grow to maturity in five to seven years.

For centuries, this plant from the South Seas has been used as an effective and natural way to relieve stress. The Western world is just catching on to this safe alternative to potentially dangerous pharmaceuticals. Kava as a supplement offers tranquil relief without side effects, without being habit forming, and without costing a fortune. The effect is comparable to drinking a glass of wine. In the Pacific, kava is considered to reduce anxiety without dulling the mind.

A great deal of chemical research has been done on kava, but plants grown in different places appear to vary in composition. The principal ingredients are alpha-pyrones: methysticin, kawain, dihydromethysticin (DHM), and yangonin, as well as derivatives of these compounds. The leaves contain an alkaloid, pipermethystine, which is found in only trace amounts in the roots.

Although Hawaiian healers used this plant for dozens of purposes, there is no question that its use to induce relaxation is not culture-specific. Tests on animals show that extracts of the drug – but no single identified compound – cause muscle relaxation to the point that animals fall out of revolving cages. It was used in Hawaii to reduce anxiety, bring on sleep, counteract fatigue, and treat asthma, arthritis pains, and urinary difficulties. It appears to act as a diuretic, and the root was even used as a weight loss agent. Medical tests suggest it may be helpful in treating psychosomatic symptoms in menopause.

Should not be taken for more than three months at a time except under a doctor’s supervision. The tested dose is 100 mg of dry kava extract three times a day, standardized to 70 mg kava lactones in each dose. At higher doses people may find it hard to walk straight or remember things, and at any dose they should avoid driving or combining kava with alcohol or anti-anxiety drugs such as Ativan or Xanax. Some people find it upsets the stomach. It can lead to blurry vision, yellow skin and rashes or allergic reactions. Daily use for months may result in serious complications.

Pay attention to the issue of liver toxicity. Don’t take more than the recommended dose.

Note: Not long ago the Food & Drug Administration (FDA) issued a warning, asking physicians to report adverse reactions associated with kava kava supplements. The public was also warned to report any side effects and the FDA warning was published in newspapers and on TV news reports. Later, published studies cleared it from any suspicion, but the damage had been done. The public backed away from the supplements based upon the bulletin issued by the FDA, and today farmers in the South Pacific have plowed up their fields. A $25 million product was destroyed.