Lavender – The Many Benefits

Lavender: In the Middle Ages, lavender was considered the herb of love.

The name, Lavender, was derived from the Latin verb “to wash” and both the Romans and Greeks scented their soaps and bathwater with the herb. 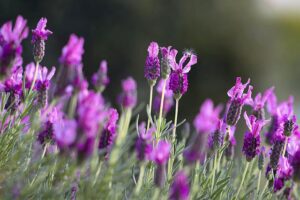 Lavender is a mint-family flowering plant with a sweet floral aroma that is easily recognized. It’s said to be native to the Mediterranean, the Middle East, and India, and it has a 2,500-year history. Lavender was once thought to be a sacred herb.

Today, some think of it as the English garden herb, others think of the Lavender Alps in the south of France where the hills are alive with color and scent. Lavender is a bushy, branching shrub, the stems of which often become a dense, woody tangle. The flowers are small, lavender-purple and bloom in June and July. It is native to the Mediteranean region, naturalized in the southern United States and is widely cultivated throughout the world.

Scientific study revealed that lavender oil may have spasmolytic, antiseptic and carminative powers. Rub a drop of the oil on your temples to help relieve a headache.

Safe but should be used in moderation. One teaspoon of flowers to a pint of water for infusions can be used as a mild sedative.

For eczema and psoriasis, add no more than two drops of oil to a cup of olive oil.

Add a few drops of this mixture in a hot bath to relieve neuralgia pain or sore feet.

Warm lavender tea can be applied as a compress for the relief of chest congestion.

For treating skin conditions including rosacea, wash and pat dry the area to be treated. Try a very small amount to test for allergic reaction first. If all is well, soak a cotton ball and gently massage it into affected areas. Repeat daily. Note: This oil has antiseptic and anti-inflammatory properties, but must be used with caution as a potential allergen.