Milk Thistle: The seeds, fruit, and leaves of Milk Thistle have been used since the Roman times as a liver tonic. 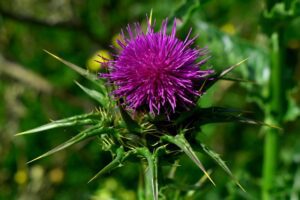 Also known as Marian, St. Mary’s, and Our Lady’s thistle, Milk Thistle is native to Europe. Originating in the Mediterranean region and grown and used as a vegetable throughout Europe, it was brought to the United States and has adapted to life in the wild in California and along the East Coast.

It is a tall plant with large prickly leaves and a reddish purple flower. The white spots along the ribs of the leaves were said to have been drops of the Virgin Mary’s milk.

The medicinal use of milk thistle goes back two thousand years. Medieval herbalists also made use of this, and in the sixteenth century English herbalists adopted it. It did not maintain its popularity, however, and by the early twentieth century only homeopaths were familiar with it. With a renewal of interest in herbal medicines, researchers started to investigate milk thistle scientifically in the 1950s. The part of the plant that is used is the small hard fruit, without the fuzz, and the seeds, which contain fatty acids and flavonoids.

This is important because the liver performs more than 500 functions in the body per day and is the last line of defense in handling toxins. The liver detoxifies poisons (such as alcohol and pollutants) that enter our bloodstream. Milk Thistle’s silymarin stimulates the flow of bile from the liver, the primary function of which breaks down poisons and fats. This herb is generally highly recommended by herbalists as a “staple” in the herbal medicinal chest.

Milk Thistle extracts contain 70 to 80% silymarin. Many clinical studies have shown silymarin has therapeutic effects in treating several types of liver disorders such as cirrhosis, chronic hepatitis, and fatty infiltration of the liver. Milk thistle is used to treat a number of liver conditions including slowing the advancement of liver cirrhosis. It may be helpful in treating Hepatitis B. It has been shown to stimulate protein synthesis within the liver, leading to tissue regeneration, fights pollutants, inhibits free-radical damage, and helps skin conditions related to poor liver function.

Biopsies and laboratory studies have demonstrated that silymarin protects the liver from the damaging effects of alcohol and toxic chemicals and stimulates the production of new liver cells to replace damaged ones. Silymarin may also help prevent or treat gallstones by increasing the solubility of the bile. Milk thistle extracts have shown very low toxicity, even when taken over a long period of time however, any serious medical condition requires professional care and anyone being treated for liver ailments should ask their doctor prior to taking any herb or herbal preparation.

The herb has also been used historically to treat depression and to increase breast milk production. Today it is a staple of alternative medicine for pregnant and nursing mothers. However, pregnant women and nursing mothers should also always seek professional guidance prior to using any herb or supplement.

Milk thistle should not be administered as a tea or as dried herb because silymarin is neither water-soluble nor readily absorbed from the intestinal tract. Proprietary products standardized to 70% percent silymarin are utilized in Europe at a usual dose of 420 mg daily.

Treatment normally lasts four to eight weeks at a minimum. Trials of three and six months are common.

Return to the Herbs Directory