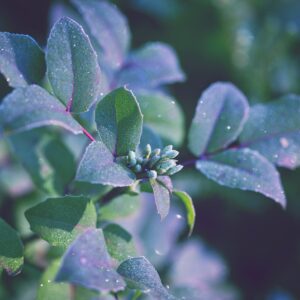 The bitter-tasting compounds as well as the alkaloids are thought to stimulate digestive function.

In one clinical trial, an ointment of it was found to be mildly effective for reducing skin irritation, inflammation and itching in people with mild to moderate psoriasis.

Whole extracts were shown in one pharmacological study to reduce inflammation (often associated with psoriasis) and stimulate the white blood cells known as macrophages. In this study, isolated alkaloids from Oregon grape did not have these actions. This suggests that something besides alkaloids are important to the properties of this natural remedy responsible for reducing inflammation.

It is an evergreen shrub which grows throughout the American northwest. It is somewhat misnamed, as the fruit are not actually grapes. It is, however, grown in Oregon (it is the official state flower).

It is a close relative of barberry (Berberis vulgaris), and shares many common uses and constituents. The root is used medicinally.

Before European colonists arrived, the indigenous peoples of North America treated all manner of complaints with Oregon grape. The berries were used for poor appetite. A tea made from the root was used to treat jaundice, arthritis, diarrhea, fever, and many other health problems.

Alkaloids, including berberine, berbamine, canadine, and hydrastine, may account for the activity of Oregon grape.Isolated berberine has been shown to effectively treat diarrhea in patients infected with E. coli. One of the ways berberine may ease diarrhea is by slowing the transit time in the intestine. Berberine inhibits the ability of bacteria to attach to human cells, which helps prevent infections, particularly in the throat, intestines, and urinary tract. These actions, coupled with berberine’s ability to enhance immune cell function, make Oregon grape possibly useful for mild infections although clinical trials are lacking on the whole root.

Tincture, 1/2–3/4 teaspoon (3 ml) three times per day, can be used. Since berberine is not well absorbed, Oregon grape root might not provide adequate amounts of this compound to treat significant systemic infections. A physician should be consulted in the case of infection before attempting to use Oregon grape.

An ointment made with 10% Oregon grape extract applied three or more times daily may be useful for psoriasis.

Oregon grape is thought to be safe in the amounts indicated above. Long-term (more than two to three weeks) internal use is not recommended. Berberine alone has been reported to interfere with normal bilirubin metabolism in infants, raising a concern that it might worsen jaundice. For this reason, berberine-containing plants should be used with caution during pregnancy and breast-feeding.

Certain medications may interact with this natural remedy. Refer to the drug interactions safety check for a list of those medications