Red Clover for Skin Conditions plus

Red clover has been used in connection with cough, eczema, and menopause. 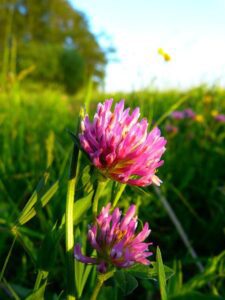 Traditional Chinese Medicine and Western folk medicine used this plant as a diuretic, a cough expectorant (an agent that promotes discharge of mucus from the respiratory passages), and an alterative. Alterative plants were considered beneficial for chronic conditions, particularly those afflicting the skin. (See Health Issues)

Known as an alterative agent (i.e., one that produces gradual beneficial changes in the body, usually by improving nutrition; also known as a “blood cleanser”). It is a traditional remedy for psoriasis and eczema. However, the mechanism of action and constituents responsible for the  clover’s purported benefit in skin conditions are unknown.

Modern research has revealed that it also contains high amounts of isoflavones, such as genistein, which have weak estrogen-like properties. This research has focused on the extract high in isoflavones as a possible treatment for symptoms associated with menopause and cardiovascular health in menopausal women.

Compared to soy, this has four isoflavones recognized for supporting both female and male hormone levels, soy has two.

A double-blind trial found that the clover improved cardiovascular function in menopausal women, but it has not been shown to provide any benefits for symptoms of menopause (such as hot flashes or vaginal irritation).

Various laboratory studies and one case report of a man with prostate cancer suggest its isoflavones may help prevent cancer.

In another case study, use by a man with prostate cancer led to noticeable anticancer effects in his prostate after the cancer was surgically removed.

Although the isoflavones may help prevent certain forms of cancer (e.g., breast and prostate), further studies are needed before red clover is recommended for cancer patients.

Traditionally, it is taken as a tea, by adding 1 cup (250 ml) of boiling water to 2–3 teaspoons (10–15 grams) of dried flowers and steeping, covered, for ten to fifteen minutes. Three cups (750 ml) can be drunk each day. It can also be used in capsule or tablet form, equivalent to 2–4 grams of the dried flowers. Also, 1/2–3/4 teaspoon (2–4 ml) of tincture three times per day may be taken. Standardized extracts providing 40 mg isoflavones per day are available as well.

Non-fermented red clover is relatively safe. However, fermented may cause bleeding and should be avoided.

The supplements should be avoided by pregnant or breast-feeding women and their safety has not been established in young children and infants.

Certain medications may interact with it. Refer to the drug interactions safety check for a list of those medications. It may also have possible interactions with blood thinning agents (asprin, Coumadin, Warfarin) due to the platelet anti-stickiness effects of the phytoestrogens and flavonoids.