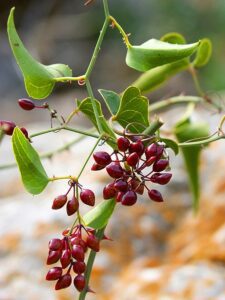 Sarsaparilla also has a tradition of use in various women’s health concerns and was rumored to have a progesterone-like effect.

Sarsaparilla was formerly a major flavoring agent in root beer.

Sarsaparilla   Click to listen highlighted text! Sarsaparilla : (Smilax spp.) Many different species are called by the general name sarsaparilla. Various species are found in Mexico, South America, and the Caribbean. The root is used therapeutically.

In Mexico, sarsaparilla is used for arthritis, cancer, skin diseases, and a host of other conditions. At the turn of the century, there were reports of its use in the treatment of psoriasis and leprosy.

It contains steroidal saponins, such as sarsasapogenin, which may mimic the action of some human hormones; this property remains undocumented. It also contains phytosterols, such as beta-sitosterol, which may contribute to the anti-inflammatory effect of this herb. Reports have shown anti-inflammatory and liver-protecting effects.

It is often taken in capsules at a dose of 2–4 grams three times daily.

This herb may cause stomach irritation and temporary kidney irritation. There are possible drug interaction problems. If you are taking prescription medicines, consult your physician.