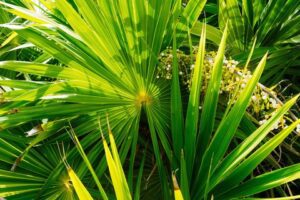 In one study, the herb was nearly as effective as the prescription drug prazosin for controlling such symptoms, and in other research it reportedly performed better than the prescription prostate medicine inasteride in reducing symptoms.

Some research has shown that saw palmetto berries may also have anti-inflammatory activity and can help reduce allergic reactions.

The plant has been used traditionally as a diuretic and may also help to stimulate immune response.

The herb’s effect on enlarged prostate tissue is by far the most clinically important.

Its berries contain free fatty acids and plant sterol compounds described as phytosterols or sitosterols, especially beta-sitosterol and some related chemicals. These ingredients appear to modify estrogen receptors and block the conversion of testosterone to dihydrotestosterone (DHT), a more active chemical. There are also flavonoids and some polysaccharides in the berries, but their activity has not been described. Standardized products contain 85 to 95 percent fatty acids and sterols.

Also called sabal palm, it grows in the southeastern United States. Its dark berries were traditionally made into a tea and taken for urinary problems or sexual difficulties. During much of the nineteenth century, saw palmetto berry extract was included in the National Formulary, a list of acceptable medicines, to treat the symptoms of prostate enlargement. As medicine came to rely more on science, doctors became skeptical about the value of this botanical remedy and it was dropped from the Formulary before 1950. More recent studies indicate that it is indeed effective for this indication and probably should never have been dropped.

For early stages of benign prostate enlargement: 320 mg extract daily, in divided doses, or the equivalent of 1 or 2 grams of saw palmetto berries. Four to six weeks may be required to determine if the herb is helping.

It is not recommended to use “home grown” berries. Even those who have the herb growing in their backyards may want to stick with commercial extracts rather than try to make their own tea. The berries do not taste good, and most of the active ingredients appear to be less soluble in water than in alcohol or hexane.

Estrogen-like activity and the ability to block testosterone conversion suggest that pregnant women and those who may become pregnant should avoid contact with saw palmetto berry extract.

Men are urged not to treat urinary symptoms without medical diagnosis. Similar symptoms might be caused by a more serious condition, such as prostate.