Spearmint is considered a remedy for indigestion and gas, although its effectiveness has not been officially recognized. 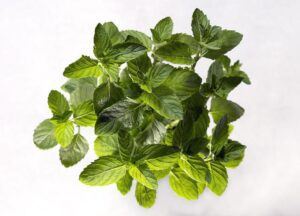 It is also used to relieve hiccough, flatulence, nausea, vomiting and colic pain, and to treat painful hemorrhoids and for rheumatism.

This member of the mint family has been held in high regard since Roman times. The ancients believed that it kept milk from souring, and used it as a bath additive, gargle, washing agent, and remedy for bee and wasp stings.

The herb is named for Menthe, a nymph who, according to legend, was turned into a plant by the goddess Persephone when she learned of Pluto’s love for the girl.

It contains an essential oil called Spearmint oil. The chief constituent is carvone, which sometimes causes allergy in users of its preparations. Also present are Phellandrine, Limonene, and Dihydrocarveol acetate, esters of acetic, butyric and caproic or caprylic acids.

It is chiefly used for culinary purposes, but it is also used in the aroma and flavor industry.

The medicinal oil is extracted from the above-ground parts of the plant by steam distillation. Today, it is used primarily as a flavoring agent in toothpaste, chewing gum, and certain food preparations. Unprocessed leaves are used as a remedy for gas.

There are no known medical conditions preclude its use. There is a slight possibility of developing an allergy to the oil. Aside from that, the herb appears to be safe.