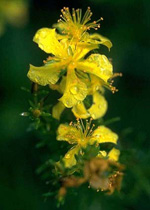 Even though St. John’s Wort has been tested and scientifically researched it’s never safe for you to diagnose your own illness. Here are some things you need to consider BEFORE taking an herbal remedy – or any type of medication:

Some side effects associated with taking St. John’s Wort are mild to severe allergic reactions, sensitivity to light, tiredness and nausea. You could also experience a lessened libido, headaches, dizziness and dry mouth.

If you’re thinking of taking St. John’s Wort, seek the advice of a health professional before you begin as it may react dangerously with some medications and ingredients in food.