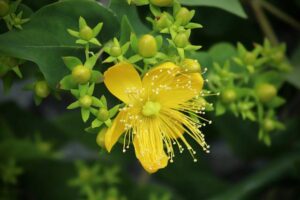 Over 30 clinical trials have studied its safety and efficacy for clinical depression. Most determined that it is superior to placebo and has a safety profile superior to pharmaceutical antidepressants.

St John’s Wort: “Pinch the yellow flowers of this attractive perennial and — presto, the petals turn red. St John’s Wort is a common roadside weed that is tied by both name and legend to religion and witchcraft. It was said on the Isle of Wight that if you stepped on the plant at twilight, you might be carried off on a magic fairy horse and not return until daylight.”

“For centuries this plant was thought to have the power to drive out devils. With the spread of Christianity, the plant was associated with St John the Baptist. It was said to bloom first on his birthday, June 24, and to bleed red oil from its leaf glands on the day in August that he was beheaded. Moreover, the plant was believed to be most potent if harvested for medicinal purposes on St John’s Day.”
Rodale’s Illustrated Encyclopedia of Herbs

St John’s Wort is a highly valued herb that has been used in healing for more than two thousand years. It contains both immune enhancing and anti-viral components and is being studied by AIDS researchers. St John’s Wort has significant concentrations of immune-modulating flavonoids, and also contains hypericin, a substance that is both antiviral and antidepressive.

St John’s Wort may act as a natural antidepressive, and provides valuable relief to those suffering from anxiety, tension and stress. While not recommended for severe clinical depression, it may help for occasional “blue moods” that don’t require professional interaction. It is also a common herbal recommendation for menstrual cramps and the symptoms of menopause.

Externally, this extraordinarily versatile herb is used in the healing of bruises, minor burns (such as sunburn), psoriasis, varicose veins and wounds.

The plant is an attractive, hardy perennial that smells like turpentine or balsam. It has the curious property of appearing to bleed when crushed. It is considered a noxious, rampant weed in California and the plant itself cannot be cultivated here. However, despite the fact that it spreads by runners, it is seldom invasive and can be controlled by pulling.

Here are some Herbal Remedies for other common problems.