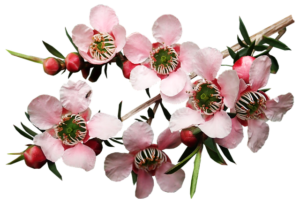 The tea tree grows in Australia and Asia. This tall evergreen tree has a white, spongy bark. The oil from the leaves is used. Australian Aboriginals used the leaves to treat cuts and skin infections. They would crush the leaves and apply them to the affected area. Captain James Cook and his crew named the tree “tea tree,” using its leaves as a substitute for tea as well as to flavor beer. Australian soldiers participating in World War I were given the oil as a disinfectant, leading to a high demand for its production.

The oil contains numerous chemicals known as terpenoids. Australian standards were established for the amount of one particular compound, terpinen-4-ol, which must make up at least 30% and preferably 40–50% of the oil for it to be medically useful. Another compound, cineole, should make up less than 15% and preferably 2.5% of the oil.

The oil kills fungus and bacteria, including those resistant to some antibiotics. A single blind study has shown topical application of 5% tea tree oil in people with acne is as helpful as benzoylperoxide and has fewer side effects.

A study found 100% tea tree oil applied topically was as effective as the antifungal medicine clotrimazole for people with athlete’s foot fungus affecting the toe nails.

It is also used for Rosacea when combined with other natural ingredients.

Oil at a strength of 70–100% should be applied moderately at least twice per day to the affected areas of skin or nail. For topical treatment of acne, the oil is used at a dilution of 5–15%. Concentrations as strong as 40% may be used—with extreme caution and qualified advice—as vaginal douches.

While this oil can be applied to minor cuts and scrapes, use caution for more extensive areas of broken skin or areas affected by rashes not due to fungus.

Precautions and Side Effects

The oil may burn if it gets into the eyes, nose, mouth, or other tender areas. Some people have allergic reactions, including rashes and itching, when applying the oil. For this reason, only a small amount should be applied when first using it. Tea tree oil should never be swallowed, as it may cause nerve damage and other problems.