More than a million gallons of witch hazel water are sold each year in the United States, making it one of the nation’s most widely used healing herbs. 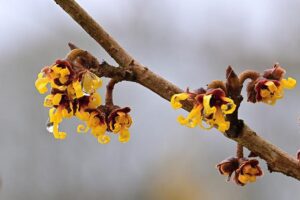 The plant is a tree with branches that are flexible. In fact, American Indians used them to make bows. Native Americans also rubbed the “tea” on cuts, bruises, insect bites and aching muscles and joints, and they drank it for a variety of ailments, including colds and menstrual problems.

The History of Witch Hazel :

During the 1840s, a Native American medicine man introduced the herb’s astringent properties to Theron T. Pond of Utica, New York, who began marketing it. Witch hazel water has been with us ever since.

Early witch hazel water was simply tea on a large scale. This herb is high in astringent tannins, which dissolved in water-based witch hazel preparations, thus making them effective astringents. But about a century ago, manufacturers switched to steam distillation, a simpler process but one that eliminated the tannins — and all herbal astringent benefits.

Nonetheless, Americans kept using it and swearing by it as a treatment for cuts, rashes and hemorrhoids. However, the commercial brands add alcohol which is also an astringent.

Preparation (How to make your own)

If you want to get the natural astringent benefits, you could make it. Boil one teaspoon of powdered leaves or twigs per cup of water for ten minutes. Strain and cool. Apply the solution directly or mix it into an ointment. It can be found in any pharmacy. It’s the active ingredient in Tucks hemorrhoid pads.

The medical literature contains no reports of harm from external use. But if itl causes minor discomforts, such as skin irritation, dilute it or discontinue use.