Wormwood – quite effective an repellent! 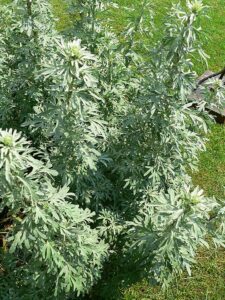 It is used in sachets to keep moths away and is planted in gardens to discourage pests. Tea made of it repels aphids.

Wormwood (Artemisia absinthium) is a plant of the Asteraceae family.

It is native to Europe, Asia, and northern Africa. The plant grows to a height of 20 inches, and has yellow, oblong leaves. The small, white flowers are arranged in clusters. Wormwood is used to make absinthe, a distilled alcoholic beverage.

Wormwood can be found in health food stores and on the internet. It’s available as an essential oil, a tablet, or a liquid extract.

The FDA considers wormwood to be dangerous for internal consumption because it contains the poisonous compound thujone. All wormwood products sold in the United States must be thujone-free, according to the FDA. (More about Thujone)

Look for a product that has received a mark of approval from a third-party body that conducts quality testing. U.S. Pharmacopeia, ConsumerLab, and NSF International are among these organizations. A mark of approval verifies that the product was made correctly, that it contains the components indicated on the label, and that it is free of dangerous contaminants.

The Bible refers to wormwood a dozen times, although it was probably A. judaica or A. herba alba to which it was referring. Again, the symbolism is of bitterness. Proverbs 5:4:

For the lips of an adulteress drip honey,
And smoother than oil is her speech;
But in the end she is bitter as wormwood,
Sharp as a two-edged sword.
Her feet go down to death,
Her steps lay hold of Sheol.

The most well-known reference, though, is in Revelations:

A Christian legend says that wormwood sprang up in the biblical serpent’s trail as he left the Garden of Eden–as a barrier to prevent its return. Consequently, snakes are not supposed to enter a garden where wormwood grows.

The active principle of wormwood is “thujone”, which in large amounts is a convulsant poison and narcotic. Though it has been used by herbalists as an antiseptic, antispasmodic, carminative, sedative, stomachic, tonic and stimulant it is not an herb to experiment with. Do not try this herb without professional advise.

It is also used to flavor alcoholic beverages including vermouth and Campari. It is the most bitter of herbs.