Yarrow: Distinctive in both appearance and aroma. 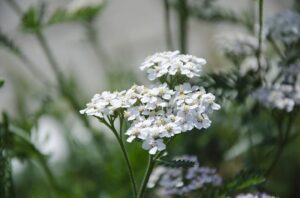 Yarrow has been used to treat wounds throughout history. In the 1950’s an alkoloid from the plant was found to have some ability to make blood clot faster.

Fever, common cold, hay fever, lack of menstruation, dysentery, diarrhea, loss of appetite, gastrointestinal (GI) tract pain, and to induce sweating are all conditions that yarrow is used for.
In addition, to cure toothache, some believe chewing the fresh leaves help.

This is a very old herb. It has been said that fossils of the herb were identified in Neanderthal burial caves.

It was used in ancient China, in field hospitals at Troy, the Trojan war (some 3,000 years ago) and the American Civil War.

Yarrow was an important medicinal plant through the ages. It also has a long history of peculiar customs and magic uses. It was one of the herbs packed in Saxon amulets for “protection”, witches used it in making incantations, it was sewn up in flannel and put under the pillow to make the sleeper dream a vision of his/her true love.

The herb has a long history of being utilized by persons studying the I Ching. Hence, it has a reputation for assisting divination.

A volatile oil called azulene and related compounds have shown anti-inflammatory activity. Research from the 60’s attribute yarrow’s anti-spasmodic effect as a result of its flavonoids. The plant also has salicyclic acid (aspirin) derivatives.

The effects of yarrow range from mild giddiness to euphoria (most commonly when brewed into a beer), which appears to be related to the thujone that some yarrows contain.

It is popular in perennial flower beds. It has lovely fern-like foliage and is covered with silky or wooly hairs. It has numerous white flower heads that resemble miniature daisies.

The above-ground parts of the plant are what is used for herbal treatments.

Yarrow seems to evoke allergic reactions in some people and its effect may be cumulative.

Pregnant woman should not use Yarrow at all.