Asparagus Root is used to treat a variety of ailments

Such ailments include heartburn, stomachache, diarrhea, and constipation. Asparagus root is also used as a diuretic and to treat urinary tract infections. 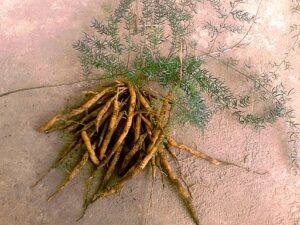 Available in capsules, tablets, and as a powder. It can also be found in some over-the-counter (OTC) products for stomach and digestive problems.

The root is a long-treasured herb by herbalists in China and India and is gaining popularity in the western world, as well. In traditional Chinese medicine (TCM), it is known as a “yin” tonic.

Also known as sharavari, is a popular herbal remedy in India. It is believed to have hormone-balancing and mood-enhancing properties, and is often taken by women as a tonic. It can be consumed in small doses regularly, or as needed.

It may enhance fertility, relieve menstrual cramps and increase the chances of conception. Rich in nutrients, including vitamin E, which is essential for reproductive health. It also contains asparagosides, a compound that has been shown to stimulate uterine contractions. Safe to consume during pregnancy and breastfeeding. However, it is important to consult a healthcare practitioner before taking any herbal remedy.

Source of vitamins and minerals

Contains a lot of asparagusic acid, which is why it smells like asparagus and small amounts of essential oils, which are also responsible for the flavor.

Q: What are the benefits of asparagus root?

A: A long-treasured herb by herbalists in China and India. It is gaining popularity in the western world as well. In traditional Chinese medicine, it is known as a “yin” tonic. It is a rich source of vitamins and minerals, including vitamin C, potassium, and magnesium. It also contains antioxidants that can help protect the body against damage from free radicals. Additionally, it is a good source of fiber, which is important for digestive health. Additionally, it is a good source of folic acid.

Q: How can I take asparagus root?

A: Can be taken as a dietary supplement in capsule or tablet form. It can also be found in some over-the-counter (OTC) products for stomach and digestive problems. Asparagus root is also available as a tea.

To make a tea, steep one teaspoon of the root in one cup of boiling water for 10 minutes. You can also add it to soups and stews. Asparagus root is generally considered safe when taken as directed.

Q: What precautions are there in asparagus root?

A: As with any supplement, it is always best to speak with a healthcare professional before taking asparagus root. This is especially important if you are pregnant, breastfeeding, or have any other health concerns. Additionally, it may interact with certain medications.