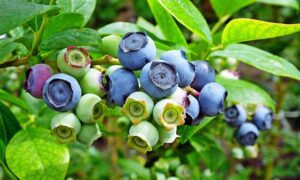 For centuries Bilberry   Click to listen highlighted text! Bilberry (aka Huckleberry) has been used as a circulatory enhancer and diabetic aid.

One of the most beneficial aspects to Bilberry’s circulatory effects is the fact that the most affected are the areas which are usually the last to be improved, scalp, eyes, dental and peripheral areas such as extremities. This is one of the dual actions that diabetes patients value in Bilberry; it’s proven action on the circulatory system which complicates diabetes and the modification of blood sugar levels in type I and type II diabetes.

Bilberry has a legendary reputation as an aid to diabetics.

*My Take: My personal experience is with a nearly immediate improvement in my vision. Of late, I’ve been reminding myself that it’s past time for my next optometrist appointment to get new glasses.  I wear a special pair of glasses for working on the computer (my “hyper-glasses”), and another pair (weaker) for everything else. Well, for several evenings now, I have NOT had to wear my “everything else” glasses hardly at all! The most dramatic improvement is shortly after taking the supplement each time. (You get a temporary boost that lasts for hours, but not permanent YET!)

I purchased Bilberry on August 25, 2022 (see image below) and am Amazed at the improvement with my vision already.  It hasn’t even been a month at the time of writing this.

Update November 26, 2022: It has now been 3 months since I started consistently taking Bilberry. I’m starting to wonder if the power I felt (described above) was more of a placebo effect. Not much, if any, improvement in my vision has come about since. Not to say it hasn’t improved at all, I believe it has to some degree.

As a general rule of thumb, when it comes to healing with herbs and natural remedies, it takes about one month for each year you have had the issue. Since I’ve been wearing glasses regularly for about a decade, it could be that I just haven’t given it enough time, so I plan on continuing use. Will periodically update you. 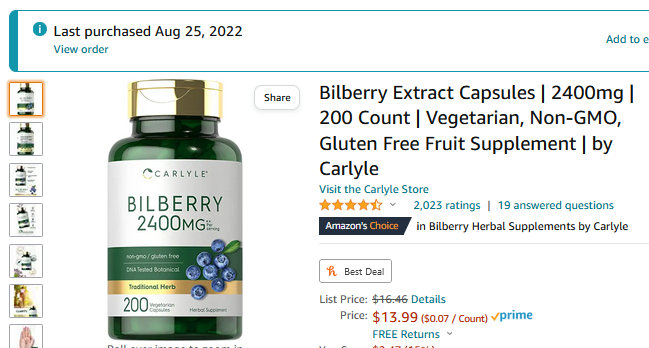 Back to the facts…

During World War II RAF pilots were forced to fly at night in order to accomplish any deep assault on Germany. Many pilots and their crew members complained of the poor visibility and its effects on their performance. It was just simply very difficult to work in the dark.

One of the families of a flight leader had an older woman who suggested using Bilberry jam as an aid to night vision. Researchers found fifty years later what the RAF already knew, Bilberry’s powerful effects increased retinal purple (RHODOPSIN) by dramatic amounts in just twenty minutes .

Further research showed that the RAF pilots who survived and continued consuming the jam or other Bilberry products had several remarkable aspects to their health. The most noticeable was perfect vision both near and far, as well as a complete absence of eye disorders throughout their lives. The group was absent of any circulatory or digestive disorders in their medical histories.

Another study showed Bilberry to improve eyesight and increase ocular blood supply in 75% of patients. It improved nearsightedness after 5 months of regular use while an 83% improvement in visual acuity was recorded after only 15 days (Remember, I’m at 12 days – it took two days to arrive from Amazon!).

One of the more encouraging statistics regarding Bilberry’s visual enhancing properties is that over 80% of the people taking Bilberry for the first time improved on their visual acuity exam and passed a night vision test within 3 minutes of ingestion. Long term improvements took an average of 6 weeks with regular doses.

The anthocyanosides of Bilberry which may vary in amounts from one variety to another have been proven to be one of the more powerful antioxidants.

Ranked higher in activity than vitamins E and C by Dr. Pierre Braquet, a well known phyto researcher anthocyanosides prevent free radical damage to collagen and collagenous tissue, making it one of the most important agents to treat diseases such as osteoarthritis, gout, and periodontal diseases.

Vaccinium Myrtillus’ anthocyanosides proved consistently to increase the acetylcholine-induced relaxation of isolated coronary arteries. This is a promising update to the already impressive list of benefits of Bilberry.

Another quality of Bilberry is the effect it has on the digestive system most notably, the stomach. Bilberry increases the secretion of the mucuous layer that protects the stomach from damage. A recent study showed Bilberry to inhibit ulcers in 63% of patients at risk.

The active constituents of Bilberry are ericolin, arbutin, beta-amyrin, nonacosane, anthocyanosides, notably myrtocyan. Anthocyanosides are a type of bioflavonoid which causes the deep blue-red color of many berries. These anthocyanosides protect the vascular system by strengthening the capillary walls.

This produces many of the secondary benefits such as lowering of blood pressure, reduction of clots, reducing varicosities and bruising, reversing poor blood supply and improving blood supply specifically to the nervous system.

Bilberry is used in Europe before surgery to prevent excessive bleeding and hemorrhaging. A recent German medical journal reports Bilberry effective in reducing excessive bleeding by 71%. Bilberry also thins the blood by inhibiting the platelets from adhesion to themselves improving capillary strength, and reducing capillary leakage. This results in improved blood flow and dramatically reduces clotting related health risks.

The fresh or dried berries are useful for a feverish liver and are useful as an adjunct in stomach conditions. In Russia the berries are called affectionately by the name “Chernika” (LITTLE black ones) and are used with the leaves in tinctures [NASTOIKA] for gastric colitis and other digestive problems.

The bilberry is a rich blue color with a faint grey bloom, similar to a blueberry. Because the bilberry is acidic, it has an entirely distinct flavor than a blueberry. Although it can be eaten raw, it is best when cooked and used in jams, jellies, pies, and sauces for game and other meats.