What are the benefits? 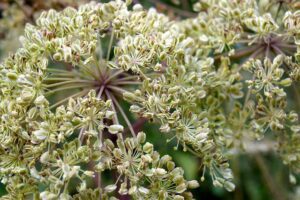 Dong quai   Click to listen highlighted text! Dong quai is believed to have a balancing or adaptogenic effect on the female hormonal system. Contrary to the opinion of several authors, it does not qualify as a phytoestrogen or have any hormone-like actions in the body. This is supported by a double blind study showing that the capsules did not help women with menopausal symptoms.

A large part of its actions with regard to premenstrual syndrome may be related to its antispasmodic actions, particularly on smooth muscles.

Human research published in English is lacking, though Chinese studies suggest it is beneficial for painful menses, infertility, and hot flashes associated with perimenopause.

It is also used for both men and women with cardiovascular disease, including high blood pressure and problems with peripheral circulation.

A member of the celery family, it has greenish-white flowers that bloom from May to August. It is typically found growing in damp mountain ravines, meadows, river banks, and coastal areas.

The root is used.

The powdered root can be used in capsules, tablets, tinctures, or as a tea. Many women take 3–4 grams per day.

Dong quai is generally considered to be of extremely low toxicity. It may cause some fair-skinned persons to become more sensitive to sunlight. Persons using it on a regular basis should limit prolonged exposure to the sun or other sources of ultraviolet radiation. Dong quai is not recommended for pregnant or lactating women.

Certain medications interact in a positive and/or negative way with dong quai. Refer to the drug interactions summary for dong quai for a list of those medications.