Fenugreek   Click to listen highlighted text! Fenugreek – From ancient times through the late 19th century, it played a major role in herbal healing but its use fell aside until recently. Modern scientific research has found that it can help reduce cholesterol levels, control diabetes and minimize the symptoms of menopause. 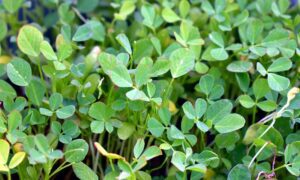 The ancient Greeks fed this herb to horses and cattle. The Romans then started using it, too, calling it “Greek hay.” As fenugreek spread around the ancient Mediterranean, physicians learned that its seeds, contain a substance called mucilage. Mixed with water, mucilage expands and becomes a gelatinous soother for irritated tissues.

In American folk medicine, it was considered a potent medicine to bring on menstruation and associated discomforts. Scientists have reported that its seeds do contain the chemicals diosgenin and estrogenic isoflavones which are similar to estrogen. Fenugreek minimizes symptoms of menopause, relieves constipation, controls diabetes, reduces cholesterol, soothes sore throat pain and coughs, eases minor indigestion, and relieves diarrhea.

Fenugreek is an annual and grows up to 16 inches tall. It has yellow-white flowers with a strong fragrance which bloom in May and June.

The Flavor of Fenugreek:

Fenugreek tastes like bitter celery with maple syrup and has been used as a maple flavoring agent.

To make a medicinal tea, gently boil two teaspoons of mashed seeds per cup of water, then simmer for ten minutes. Drink up to three cups a day. To improve the flavor, you can add your favorite sweetener, lemon, anise or mint. Dosage of a decoction should be up to three cups daily, or a tincture of 1/4 to 1/2 teaspoon up to three times daily. Fenugreek is considered safe however, it should not be used by pregnant women since it is considered a uterine stimulant.

Externally Fenugreek is used as a compress or in a facial steam. It cleanses oily skin, minimizing blemishes and also strengthens the scalp when used on the hair.