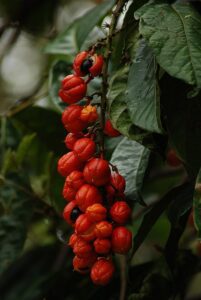 In the United States, guaraná fruit powder and seed extract have not been determined for status as “generally recognized as safe” (GRAS) by the Food and Drug Administration, but rather are approved as food additives for flavor (but not non-flavor) uses.[16][17]

Guaraná is used in sweetened or carbonated soft drinks and energy drinks, an ingredient of herbal teas or contained in dietary supplement capsules. South America obtains much of its caffeine from guaraná. [Wikipedia]

The effects of varying doses of guarana on mood and learning were investigated in one study. It was compared to ginseng, another brain-boosting ingredient, in another. Although both guarana and ginseng increased memory and test performance, guarana users were able to complete them faster.

A woody vine native to the Amazon. It prevents drowsiness and may reduce the risk of heart attacks. However, a cup of it contains three times more caffeine than a cup of coffee. People in South America either chew a spoonful of the seeds or crush the seeds with a mortar and pestle and add a bit of water to mix up a paste. The dried paste is then used to make a hot beverage like coffee.

Guarana contains a lot of antioxidant chemicals, similar to that of green tea. It contains caffeine, theobromine, tannins, saponins and catechins.

Being caffeine-rich, it can help with weariness and concentration problems. Caffeine inhibits the effects of adenosine, a drowsy-inducing substance that also helps your brain take a break and relax.

It may have the ability to keep your red blood cells moving when they have a tendency to clump together and trigger a heart attack according to a laboratory study conducted at the University of Sao Paulo in Brazil. However, further studies are needed. It may also hold potential as a heart protector but, it’s still too soon to recommend it.