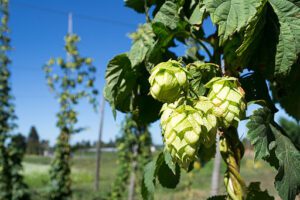 The medicinal action and uses of hops have tonic, nervine, diuretic and anodyne properties. Their volatile oil produces sedative and soporific effects (causing drowsiness), and the Lupamaric acid or bitter principle is stomachic and tonic.

The official preparations are an infusion and a tincture. The infusion is employed as a vehicle, especially for bitters and tonics: the tincture is stomachic and is used to improve the appetite and digestion. Both preparations have been considered to be sedative, were formerly much given in nervousness and hysteria and at bedtime to induce sleep; in cases of nervousness, delirium and inflammation being considered to produce a most soothing effect, frequently procuring for the patient sleep after long periods of sleeplessness in overwrought conditions of the brain.

An infusion of 1/2 oz. Hops to 1 pint of water is generally the quantity for ordinary use. It has proved of great service also in heart disease, fits, neuralgia and nervous disorders, besides being a useful tonic in indigestion, jaundice, and stomach and liver affections generally. It gives prompt ease to an irritable bladder. A pillow of warm Hops will often relieve toothache and earache and allay nervous irritation. Hop juice cleanses the blood.

A decoction of the root has been esteemed as of equal benefit with Sarsaparilla.

As an external remedy, an infusion of Hops is much in demand in combination with chamomile flowers or poppy heads as a fomentation for swelling of a painful nature, inflammation, neuralgic and rheumatic pains, bruises, boils and gatherings. It removes pain and allays inflammation in a very short time. The Hops may also be applied as a poultice.

Hops have been used in the breweries of the Netherlands as early as the fourteenth century. The leaves and flower-heads have been used to produce a fine brown dye. Were at first thought to engender melancholy.

A native British plant. It is found in most countries of the North temperate zone. The root is stout and perennial. The stem that arises from it every year is of a twining nature, reaching a great length, flexible and very tough, angled and prickly. The leaves are heart-shaped and lobed, on foot-stalks, and as a rule placed opposite one another on the stem. They are of a dark-green colour with their edges finely toothed.

The small fruit (achene) is sprinkled with what appears as a granular substance. Much of the value of Hops depends on the abundance of this powdery substance, which contains 10 per cent of Lupulin, the bitter principle to which Hops owe much of their tonic properties. The ripened cones of the female Hop plant that are used in brewing, female plants only are cultivated.

The parts used medicinally are the strobiles, lupulin. The chemical constituents are a volatile oil which consists chiefly of the sesquiterpene Humulene, there is also Lupamaric acid.

The leafy organs contain about 5 per cent of tannin which is not a constituent of the glands. Hops yield about 7 per cent Ash.

The oil and the bitter principle combine to make Hops more useful than Chamomile, Gentian or any other bitter in the manufacture of beer: hence the medicinal value of extra-hopped or bitter beer.

The tannic acid contained in the strobiles adds to the value of Hops by causing precipitation of vegetable mucilage and consequently the cleansing of beer.