Does Horse Chestnut help with Edema or Varicose Veins? 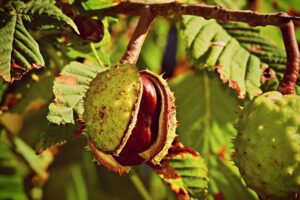 A clinical study compared Horse Chestnut extract to compression stockings and placebo for varicose veins. Both the herbal medicine and the stockings significantly reduced edema of the lower legs compared to placebo. Feelings of tiredness and heaviness, pain, and swelling in the legs were alleviated by the extract, in comparison to placebo. The extract also is reported to have anti-inflammatory activity.

It contains several triterpene glycosides, with aescin predominating in the seeds. Coumarin glycosides aesculin, fraxin, and scopolin and their corresponding aglycones, aesculetin, fraxetin, and scopoletin, are also found, along with flavonoids such as quercetrin. Allantoin, leucocyanidins, tannins, and the plant sterols sitosterol, stigmasterol, and campesterol have also been identified. The commercial extract utilized in Germany is standardized to contain from 16 to 21 percent triterpene glycosides (calculated as aescin).

Traditional uses for the tea also included arthritis and rheumatic pain and coughs. It was applied to the skin to treat some sores and rashes. But although a component of the bark (aesculin) is used in sunscreens in Europe, this phytomedicine is rarely used for topical application now.

The standardized extract is considered a valuable aid in treating varicose veins. It inhibits the enzyme hyaluronidase and makes veins less permeable and less fragile. It can improve the tone of veins and increase the flow of blood through them. Scientific studies (randomized double-blind, placebo-controlled) have shown that it can reduce edema.

In folk medicine, the teas were used to treat diarrhea and hemorrhoids.

Horse chestnut trees originated in northern India, the Caucasus, and northern Greece but have long been grown throughout Europe. Relatives in the same genus grow in the United States as California buckeye (A. californica) and Ohio buckeye (A. glabra). The seeds of these plants are toxic, however. Horse chestnut bark and leaves, as well as a standardized extract of the seed, are used in Europe.

Horse chestnut extract (delayed release) is given at a dose of 250 to 312.5 mg twice daily, providing 90 to 150 mg aescin. After improvement, the dose is reduced to 35 to 70 mg aescin daily. Use for up to twelve weeks has been studied.

Horse chestnut therapy should be supervised by a knowledgeable health professional due to possible toxicity. People with bleeding disorders should avoid horse chestnut. The coumarin glycoside aesculin can exert an anti-clotting action.