Passion flower (passionflower) extract has a slightly narcotic effect when taken internally. It has been used as a tranquilizer to treat tension, fatigue, insomnia, and muscle spasms. 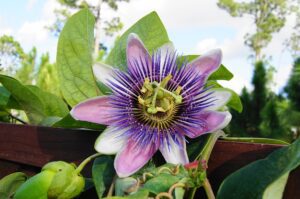 It is said to be just as good in treating symptoms of generalized anxiety disorder as the medication oxazepam (Serax), according to studies on patients with the condition.

My Experience: I have what my doctor diagnosed as WCH (white coat hypertension). Yep. Every time I went to see my doctor, or dentist, my blood pressure would skyrocket. (If you ever read my “About” page, you’ll see why.) So, my doc gave me a mild anti-anxiety prescription to try. It was an improvement but I don’t like taking prescriptions. So, why not try passion flower? Yep, it worked just as well!

“The association of the passionflower with Christ dates back to the seventeenth century. The five petals and five sepals of the flower represented the ten faithful apostles (absent are Judas, the traitor, and Peter, who denied he knew Christ). The dramatic corona resembled the crown of thorns that Jesus wore; the five stamens represented Christ’s five wounds; the curling tendrils symbolized the cords used to whip him; and the leaves were thought to represent the hands of Christ’s persecutors.” Rodale’s Illustrated Encyclopedia of Herbs

This intriguing plant is a climbing vine with tendrils and is indigenous to the southeastern United States, as well as Central and South America.

A cup of medicinal passionflower tea can be made with 1/2 to one teaspoon of the dried herb to one cup of boiling water. Smoking passionflower was supposed to impart a marijuana-like high.

It is also quite soothing in an herbal bath.

In small doses it has no known toxicity. However, it may cause side effects such as drowsiness, dizziness, and confusion.

If you are pregnant, trying to get pregnant or nursing, avoid using it. Some believe that taking passionflower in the recommended doses and for a maximum of two months at a time is safe and harmless.

Passionflower is currently recognized as generally safe in the United States by the FDA.  It also continues to be used in quite a few sedative-hypnotic drug mixtures marketed in Europe.

You may also be interested in St John’s Wort.