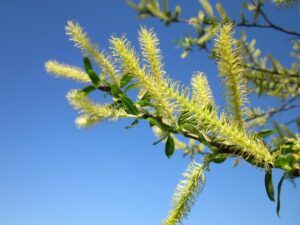 In fact, pharmaceutical aspirin was originally created from a chemical very similar to one found in white willow bark. Today there are more reasons than ever to use this herb. Medical research shows that this chemical in white willow (called salicin) not only reduces fever and relieves pain and inflammation but also may help prevent heart attack, stroke, digestive tract cancers and migraine headaches.

Chinese physicians have used willow to relieve pain since ancient times. During the mid-1700s, British minister/physician Edmund Stone was trying to find a cheap substitute for cinchona bark, the rare, costly South American herb used to treat malaria (and later shown to contain the antimalarial drug, quinine). Cinchona was a bitter-tasting bark, and near Stone’s Oxfordshire home, he found another bark that looked and tasted similar-white willow. As an experiment, he gave willow bark tea to people with fevers. Their fevers and pain subsided. The herb quickly became the treatment of choice for fever and subsequently for pain and inflammation as well. During the early 19th century, European chemists created aspirin from white willow bark’s active chemical, salicin. Aspirin hit the market for the first time in 1899, and within a few years, it was one of the most popular drugs on earth.

Herbal experts say that white willow bark will work on fever, pain and inflammation. It will stand in for aspirin, but not quite as well. The salicylate content of willow bark varies. The herb may also help people who suffer from migraine headaches, since use of low-dose aspirin has been shown to significantly reduce attacks.

To make a medicinal drink, soak one teaspoon of powdered bark per cup of cold water for eight hours. Strain it and drink up to three cups a day. White willow tastes bitter and astringent. To improve the taste, you can add sugar or honey and lemon. You can also mix it into an herbal beverage tea.

Aspirin upsets some people’s stomachs, but most herbalists say white willow bark rarely causes this problem. If stomach upset, nausea or ringing in the ears develops, reduce your dose or discontinue use. Pregnant women and those with chronic gastrointestinal conditions such as ulcers, colitis or Crohn’s disease should not use this herb.

Note: Heart attack, stroke, cancer and migraines are serious conditions requiring professional care. If you’d like to use the bark in addition to standard therapies, discuss it with your doctor.

You may also be interested in the herb that helps prevent migraines, which is Feverfew.