In China, in the days of the Dynasties, the schisandra chinensis   Click to listen highlighted text! schisandra chinensis berries were highly valued for their ability to preserve a youthful appearance. It was said to help one become radiant. Schisandra being a mood elevator, through health and increased mental clarity, is capable of helping one experience a happier, as well as a healthier, lifestyle. 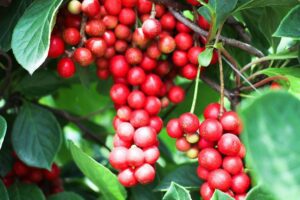 The plant is a climbing vine of the Magnolia family with many variants growing in the Carolina’s, Georgia, Florida and many other states. It is found in many regions of China, Korea, Japan and is found in adjacent areas in Russia. Modern investigation, research and use has proven Schisandra to have value in many areas but none so interesting as it’s use as an adaptogen.

Recent popularization has led to it’s inclusion in herbal preparations designed to be used as stimulants. Most of these contain Ma Huang, Guarana and/or caffeine. But an adaptogen works on a much deeper and profound level. By bringing a balance or a “homeostatis” to the organs the use is responsible for a harmonious condition to spread in the body.

Recent research has proven Schisandra Chinensis to stimulate the gastro-intestinal tract, immune system, central nervous system, lungs, liver, kidneys/adrenals, general metabolism and is known to improve short term and long term memory as well as other mental functions. They aid the body’s ability to utilize oxygen and therefore help anyone with respiratory problems or just in need of extra energy. This also is essential in chronic viral conditions.

Clinical studies show a wide range of positive effects on mood and emotional stability by stimulating portions of the central nervous system.

Schisandra Chinensis strengthens and quickens reflexes and increase efficiency in stress related tests. It is seen by the traditional Chinese herbalist as being a very balanced tonic and is represented as both tonic to yin and yang instead of one or the other. In the traditional view herbs are also considered to have a unique ‘signature’ in appearance as well as taste and other attributes. In this case, being called ‘Wu Wei Zu’ or ‘five tastes herb’ is very much considered a balanced herb due to this quality of having every flavor. This characteristic of containing all five flavors also relates to it’s inherent quality of imparting the energy of the five elements, in a balanced and profound manner. Perhaps we perceive this balance in a different manner yet the results cannot be denied as these tart little red berries have an unusual ability to tone and balance not only physiological but emotional states as well.

This balancing act is evident in results with users who show improved concentration and positive results in other areas such as insomnia, mental fatigue, memory problems yet these effects do not cause the unwanted side effects that always accompany central nervous system stimulants. Instead, this herb has been shown effective as a sedative, especially in tincture form. Its action on the liver and kidney’s contribute to it’s renown as a longevity herb. It has a nourishing action on the liver and also increases the Jing, the energy of the kidney’s and adrenals.

Apart from it’s use in preserving a radiant youthfulness, it’s new reputation as a smart drug, and increasing sexual stamina, this herb is without adverse side effects and actually has a positive cumulative effect. In China it is said with 100 days of use that Schizandra will “purify the blood, make one radiant and restore the liver” (the liver is associated with aging in China). The long term benefits are, as with any adaptogen, a strengthened constitution, the ability to resist stress whether chemical, or emotional and the heighthened resistance to disease. Specifically, Schizandra has been shown to strengthen and protect the liver through regeneration and detoxification, it increases metabolic activity due to the increase of hepatic glycogen content and relieving fatty degeneration of the liver and it has also been shown to improve eyesight and is currently being researched to determine through what mechanism and to what extent.

The recommended dosage depends upon what effects are desired and what form is being used. The ripe, dried berries are used to make a most delicious tea. Take 2 to 4 tablespoons of berries and immerse in 2 cups water. Bring water to boil. Reduce heat to a simmer and continue simmering 12 minutes or until the liquid is reduced to one cup. Strain and cover with 3 cups water so that the process may be repeated when desired. The berries may be reboiled until they lose their color and taste, perhaps as much as three times. Honey may be added but sugar is not recommended. Two to three cups of tea per day should be enough for the desired results.

As with any adaptogen, there is an immediate and a long term effect. Use patience and common sense in your experience with herbs, adaptogens and nutritives also. Any common food can be considered dangerous if used without awareness. The tincture is a bit more sedative than the tea. It is used when more immediate effects are desired.

The recommended herbs for combination are determined by many factors. For males ginseng is most helpful as is Ho Shou Wu. For females Dong Quai is recommended as well as Peony root (red). Dong Quai should be eaten in small quantities over long periods of time.

For immune purposes ginseng and astragalus (Huang Ch’i) are excellent as well as Reishi mushroom can be used with Schisandra. For energy, Ginseng, Astragalus and/or Codonopsis (Dang Shen) mix well with it. Also Ho Shou Wu and Lycii berries. To calm one’s spirit or for insomnia use red dates and ginseng with Poria Cocos (Fu Ling) and this herb in a tea along with a large portion of cordyceps. Prepare as you would for Schisandra using equal portions. For a female tonic which prevents PMS and cramps use this daily: Schisandra, Dong Quai, Lycii berries and Peony root.